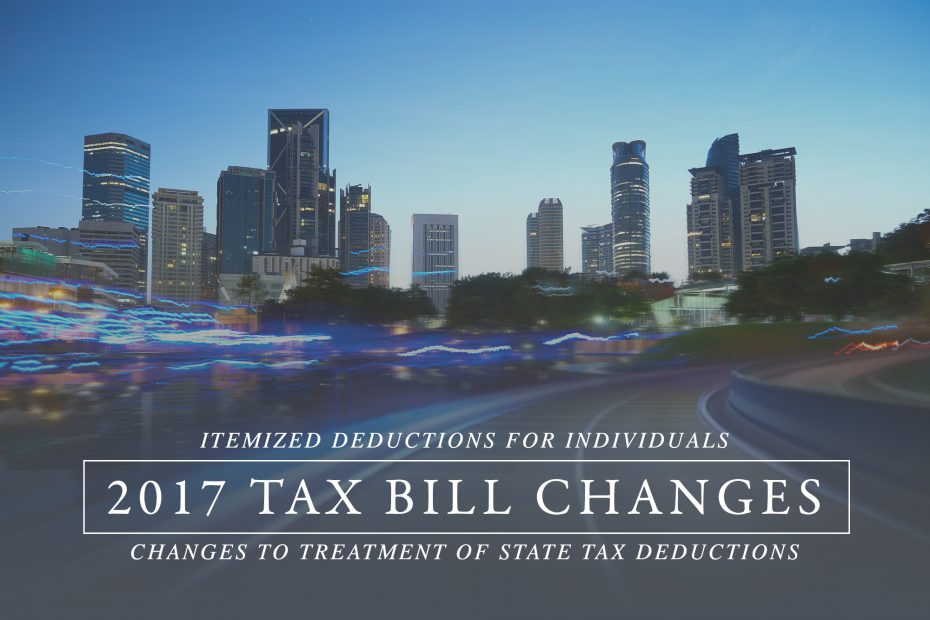 Personal property taxes imposed by state and local governments, and

Any income taxes imposed by state, local, and foreign governments.

Personal property taxes include any “ad valorem” (based on value) taxes on things like cars, boats, planes, etc.  Thus, the portion of your car license tab cost that is based on the value of the car is deductible as a personal property tax. Portions of the cost not based on value aren’t deductible, so if your state imposes a fixed base fee for tabs, or a surcharge for transit improvements that isn’t based on the value of the vehicle, those costs aren’t deductible.

Effect of the change

Internal Revenue Code §164(b)(6) places a cap on the total deduction allowed to individuals for state and local real property, personal property, and income taxes of $10,000. The $10,000 limitation applies to married filing joint returns as well as those filing single. It’s important to note that the cap is per return, so married couples are subject to the same $10,000 cap as single individuals. Married individuals filing separately are subject to a cap of only $5,000.

The deduction for foreign real property taxes has been removed entirely.

The $10,000 cap is a significant change to taxpayers residing in high income tax states such as California, New York, and New Jersey, among other states. The effect of being allowed to deduct state income and real estate taxes in determining federal estate taxes was, in effect, a federal subsidy to high tax states.

Immediately after the passage of the 2017 Tax Act, politicians in several high tax states stated they were evaluating changing their state income tax rules to allow high income taxpayers to change their state income tax payments to charitable deductions in order to allow those taxpayers a benefit. Tax commentators noted at the time that this was a questionable strategy because the rules for deducting purported charitable contributions have always required that the donor must have had a charitable intent in making the contribution. In May, the IRS issued guidance indicating that such schemes would not pass muster with them and that additional regulations would be issued shortly clarifying the issue.

Should residents of high-tax states move?

There have been a lot of news articles lately discussing whether taxpayers residing in high-taxed states should consider moving to states with lower tax regimes. Here are some thoughts on that issue.

Not everything is about taxes

As difficult as it is for tax accountants to admit this, taxes aren’t the most important part of people’s lives. People (hopefully) have deep ties to the place they’re living now. Moving means starting over again with friends, work, associates, school, clubs, church, and on an on. It’s easy to quantify the savings from moving from a high tax state to a lower taxed state, but it’s almost impossible to quantify the value of those changed relationships.

Saving costs can be costly

Moving from one state to another can mean incurring significant costs, especially for homeowners. The transaction costs on selling a home usually range from 8% to 11% of the selling price of the house. Moving costs may cost thousands of dollars, possible tens of thousands of dollars.

Moving may have an effect on your income

For most people, their income is directly or indirectly tied to where they live – for someone who operates a service business, moving to a new state will also usually involve developing a new client base. For someone who’s an employee, even if you can move to a different state and stay with the same employer, the move may change your career trajectory within the company.

Breaking residency for tax purposes in a state is hard

This is a complex subject that merits a more involved article at a later date, but for purposes of this article, let’s just say that breaking tax residency in one state and moving to another can be fiendishly involved and complicated. California and New York, in particular, are very aggressive about asserting that taxpayers have not yet broken residency and are still subject to tax as residents on their worldwide income. Careful planning and impeccable recordkeeping are critically important in planning a change in residency for tax purposes.

It’s not something as simple as checking a box on the tax form – the change in residency has to be more than a wink and a nod.

It’s not simply based on time spent in the state – California has successfully challenged the residency of people who spent zero time in California in a given year.

Some of the factors that do matter: location of active businesses owned, which state driver’s license is from, where are bank/brokerage accounts located, membership in country clubs and social clubs, schools children attend, where vehicles are licensed, location of voter registration, residency claimed for hunting/fishing licenses, and on and on.

State tax audits on residency are some of the most invasive interactions possible with taxing authorities.

What does it all mean?

With the limitations on federal benefits of having paid a lot of state taxes being almost eliminated, a number of taxpayers may consider moving to a lower-taxed state. It’s not a decision to be taken lightly or without a lot of careful planning.